This post was modified and reposted on Sept 30, 2016, the latest version can be found here. 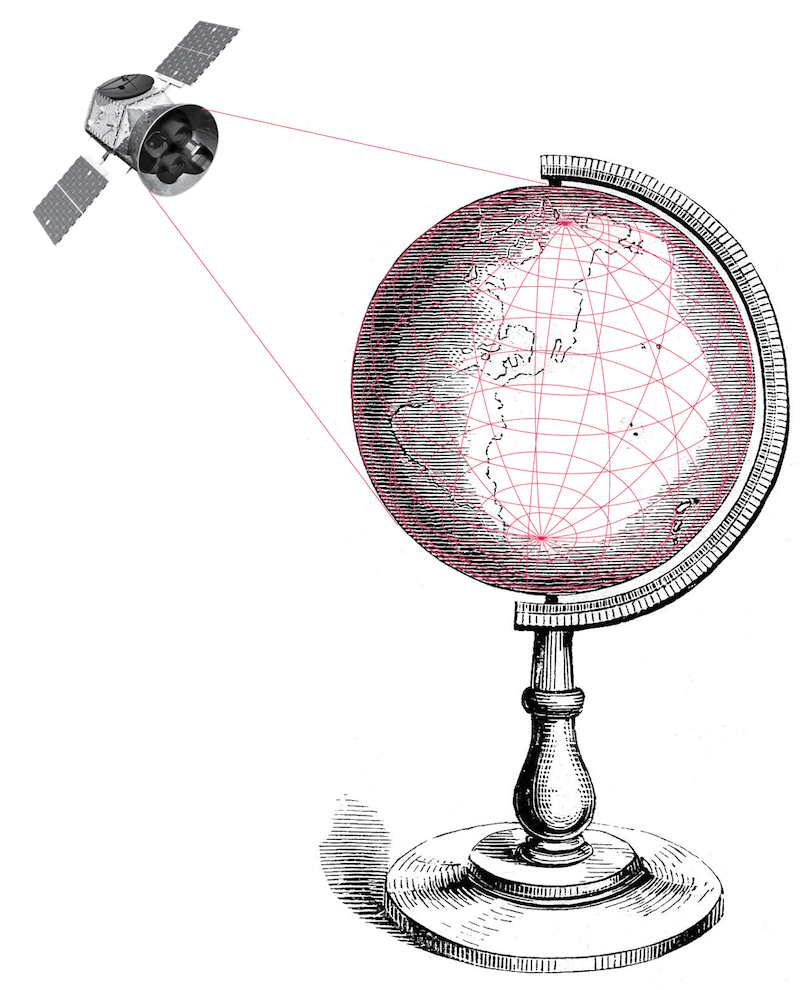 Shortly after I downloaded Pokèmon GO, my wife claimed possession of the phone and did not return it until the battery died. As we headed across town to see a movie Ann reported back on details of this new dimension of an otherwise familiar journey. I drove and she peered into the phone describing what I couldn’t see out the windshield.

Giving an absolute and verifiable spatial dimension to something, even something as contrived as a Bulbasaur or a Caterpie, is an effective rhetorical device. All kinds of surprising new things existed in the space we passed by. Everything was invisible but there, like the Shinto spirits that inspire the game.

I found myself looking in the rear view mirror thinking about the monsters and Pokèstops we’d left behind, trying to imagine their exact location. Knowing that we could turn around and find them, knowing that they were still back there waiting for us, made the experience feel eerily real.

In his 1950s story “On Exactitude in Science,” Jorge Luis Borges describes a land where small maps, “Unconscionable Maps no longer satisfied, and the Cartographers Guilds struck a Map of the Empire whose size was that of the Empire, and which coincided point for point with it.” Fifty years before Borges, in “Sylvie and Bruno concluded,” Lewis Carroll also explored the idea of a 1:1-scale map.

According to both Borges and Carroll, people found these maps impractical. Borges’ map was deemed “useless” by future generations who eventually let it disintegrate back into the earth. Farmers prevented Carroll’s map from ever being unfolded—their need for the sun was in conflict with wrapping the globe in a giant paper map of itself. In Carroll’s telling we eventually stopped making maps and started using the world as a map of itself.

Now, after thousands of years of making small, “unconscionable maps” we’re finally realizing Carroll’s vision of the world as a 1:1 map of itself.

The screens and sensors we put in our pockets, strap to our wrists, and build into nearly every vessel or moving object create the map and make its existence known. Space exploration and digital computing, which were in their infancy as Borges published Exactitude, make it possible to observe, store and share our experience of the world with mind-boggling detail.

The points and relations of the our 1:1 map aren’t just a depiction of space, but a communally-created and shared record of our experience in space. And, as Pokèmon demonstrated on a global scale, this map is deeply ingrained in our culture.

To unlock a new level in the game we took a detour on the way home and parked in front of the post office.

While Ann played, I watched passersby.

Amoebae-like groups of teens clustered on the sidewalk, everyone playing, eyes on screens as they lurched down the street. A middle-aged couple stood on the corner a sharing a single phone, pointing in different directions. A man pulled up across the street in a Prius, parked illegally, put on his blinkers and pulled out his phone, Pokèmap visible. He drove off a minute later.

Our phone battery finally gave out and the spell of this new world was broken. We headed back to the house. 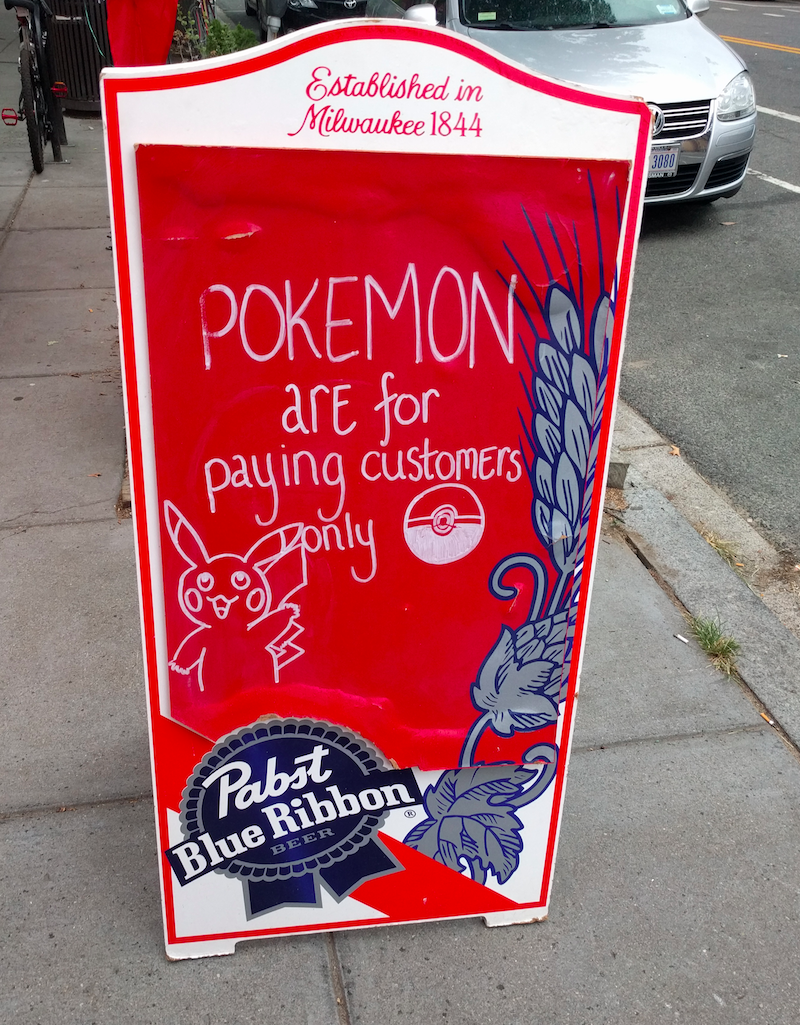 As geographer Denis Wood says, maps aren’t objective depictions but rather arguments that we make about the world. The property line is here. The Pokèmon is there. We use maps to make the case for what we believe, or want to be true. We use maps to express a worldview.

I think Wood is right. The Borgesian map that succeeds in actually replicating the world is a fantasy.

But I also think that as users of maps—looking in the rearview mirror for Pokéstops or consulting the smartphone on where to eat—it is becoming harder to find the boundary between the map as argument about the world, and the world itself.

The scale, precision, and sheer ubiquitousness of the modern 1:1 map blurs the line between our own direct experience of reality and new layers of reality contained within digital maps.

Our 1:1 map isn’t the project of emperors and cartographers guilds. It is a collection of an exponentially growing number of small observations. It’s the sum of these observations, whether Pokéstops or bus stops, make the map useful and interesting. Each layer of data has its own rules, limitations and subjectivities. But when combined together and integrated with our physical experience of the world, the map becomes convincingly real, and useful.

The map feels so real, not only thanks to its ever growing detail, but because we’ve cleverly embedded it into our surroundings. Unlike Carroll’s opaque map, unfolded, blotting out the sun, our map is a translucent overlay on the world—quite literally in the Pokémon universe, and metaphorically in many others. The map has become not only a layer of data, but a lens.

As the map becomes more deeply integrated into how we interact with our environment its edges become less visible. Driving directions are an overlay of verbal commands that subtly shape how we move through space, perhaps even displacing our own mental maps. And when turning the corner onto a newly explored street, the speed and ease with which I can overlay the collective experience of others on top of unfamiliar places eliminates the need to make my own snap judgements. I find myself doing this almost reflexively.

To Wood’s point, the modern 1:1 map might still be an argument, imperfect and forever incomplete, but increasingly, it is an argument we’re willing to accept as true.

The convenience and precision of GPS plays a major role in making the map so persuasive.

For most of human history figuring out our location was profoundly difficult. Over time we developed tools that unlocked natural properties of our surroundings, like the earth’s magnetic field or the position of the stars, to help divine our location. We also created human-made reference systems, like signs, lighthouses and radio beacons to guide our journeys.

But despite their usefulness, these technologies are simply tools that assist with the process of locating. Location itself remained a matter of interpretation and was defined as much by point of view as the actual place we stood. Well into the 20th century, the cultural and political differences embedded in maps and geographic reference systems remained a fundamental challenge in communicating location.

Even when we agreed on where we were, determining location was still difficult, time consuming, and often frighteningly imprecise. Ship captains and aviators, flying some of the most advanced aircraft ever built, still looked the stars—and hoped for clear skies—to figure out where they were.

All this changed with the creation of GPS. We embedded location in space itself. This level of precision and certainty of made it feasible to automatically index our experience of the world against a global, universal address system. Location became a knowable, and shareable, property of things and actions.

GPS has given us the sense of location. It is a sense that depends on prosthetic adaptation to experience, but a sense nonetheless.

We depend on devices to experience location, a GPS receiver to be specific. In the early days of GPS, the devices we used were chunky radio receivers with nothing but the basic computational ability needed decipher latitude and longitude from radio signals. The GPS receiver picks up timing signals broadcast from satellites, applies a formula and returns a set of coordinates.

Increasingly, the devices we used to decipher GPS are maps. These maps contain GPS receivers, and other technologies that help improve the map’s locational precision, but they no longer simply provide us with coordinates. The map become the lens through which we experience locational awareness. This shift links our newfound sense of location with the worldview embedded in the map, and combines the objective understanding of where we are with subjective interpretation of place.

This isn’t just a simple byproduct of two complementary technologies. The connection between location and interpretation is what makes the 1:1 map so useful, and so seductively real.

The imersiveness of Pokèmon is parlor trick made possible by using locational awareness to augment our experience of place. But the only thing unusual about Pokèmon is the heavy-handedness with which it executes this illusion. This same rhetorical technique is used both subtly and overtly by an increasing range of digital interfaces—it makes the experiences they provide more convenient, informative and convincing.

As Wood points out, all maps alter our perception of the world, either by accident or intent. But as we hand over our innate ability to understand where we are over to devices that are by definition changing how we perceive our surroundings, we will encounter an increasingly blurry boundary between the world around us and the 1:1 map we now live within.